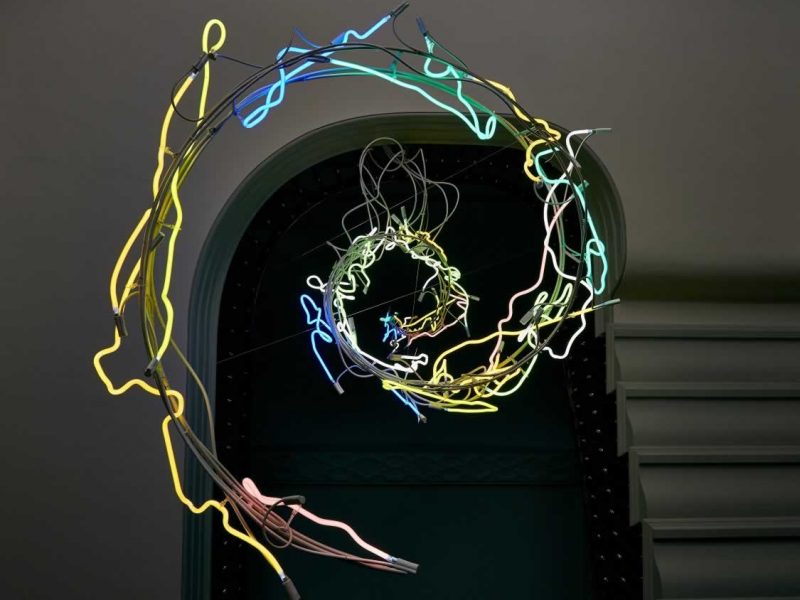 Alleyways is a socially engaged art project for Armagh City, led by the artist Kevin Killen. The artist’s challenge is to research and develop ideas and designs for an urban public art scheme through a six-month process of creative collaboration with the local community, before producing and installing a new public art feature for the narrow streets and alleyways in the centre of the city.

Kevin Killen
The artist leading the Alleyways project is Kevin Killen. Based in Northern Ireland, Kevin’s creative practice focuses on site-specific neon installations and large-scale public artworks. He also has extensive experience of working in a range of community settings on creative projects. Kevin’s current practice is the creation of self-made neon light sculptures and installations, often site-specific. The works capture moments in time, representing life and peoples’ physical journeys as snapshots of lives.
Born in 1977 in Belfast, he graduated from the Surrey Institute of Art and Design University College in 1999 and completed further specialist training in neon making in Dallas, Texas in 2009. Now based in Northern Ireland, Kevin has been continually exploring his own visual language using the medium of light, exploring issues of boundaries and behavioural patterns.

Kevin’s practice is the creation of neon light sculptures and installations, often site-specific. He physically makes the neon himself and this process of controlling the neon is very much part of the work. While different bodies of work have very separate theories behind them, the connection is his desire to use light to translate movement into tangible sculptural forms.

Kevin’s most recent body of work, Infinity Studies: Monotony, draws on time and motion studies, as investigated by Frederick Winslow Taylor (time) and Frank and Lilian Gilbreth (motion), that document the time it should take to complete a process and how breaking down the process into components and removing unnecessary ones increases efficiency. Kevin looked at the number of repetitive tasks his wife performs to look after their three children and the house. He created an immersive box to simulate the claustrophobia felt by his wife at the never-ending nature of her tasks.

Another project, Cartography – Tipping Point, used a camera to map “light paintings” of the city that he then translated into neon sculptures. Part of the process was to record the sounds of the city to match with the sequence of neon, creating a “living” sculpture that recorded the life of the city.

The series Human Movement – Certain Moments created light compositions tracing the movement of a dancer, with the resulting neon sculptures embodying the kinetic energy of the performance.

Kevin Killen has been working with Armagh residents since September 2018, finding out about the lesser-known histories of the narrow streets and alleyways in the centre of the city, and meeting some of the people who live and work there. As he learns more about the stories of the city from working with all sorts of local groups, Kevin has been exploring a variety of themes and visual possibilities for the scheme.

See more of Kevin’s work on his website http://www.kevinkillen.com/