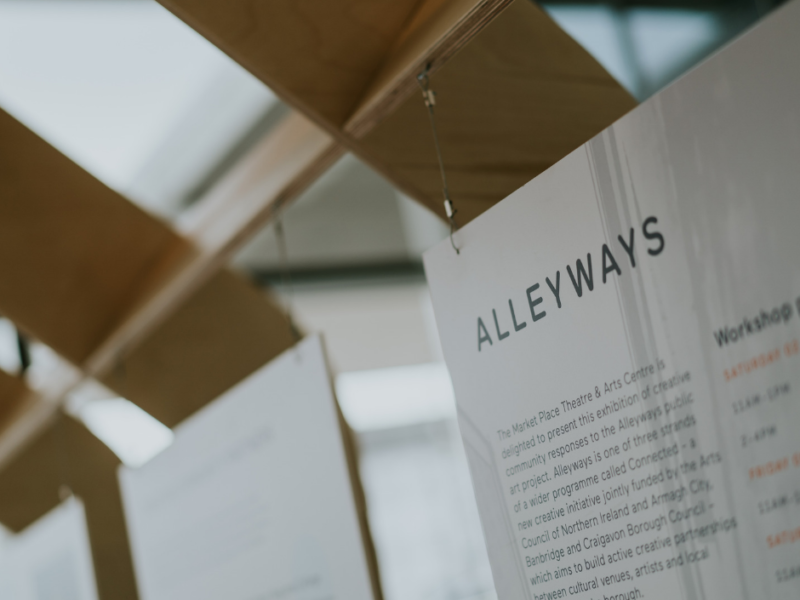 Alleyways Connected ran a series of public workshops throughout January and February 2019. One of the workshops ‘Flash Fiction’ focused on writing where participants told a full story in less than 750 words. These stories focused on Armagh, its streets and alleyways. Below is one of the stories that were written in the workshop by Byddi Lee.

Market Street, my childhood playground in the mid-seventies, where blunted pyramidal bollards arose from an expanse of black tarmac, like giant concrete icebergs. Iron bars strung between them as if to stop them from floating off. An instant gymnasium where my sister and I tumbled and hung from our knees, the smooth metal biting cold against bare skin in the winter, silky in the summer. We’d skip down the hill to the library, plod back up clutching our books. The siren blare from the top of the library made my insides shrivel and my skin loosen as though I might slide out of it.

In autumn, leaves piled in musty copper heaps along the cathedral rails at the top of the street. My father often recounted the story of seeing a little boy with his head stuck in those same railings; Marveled at how the firemen had lifted the child bodily up and turned him so that he could push his head out face-first, the same way he’d gone in, the ears– a one way valve.

Dad grew up on this street too. Every crack in the pavement and brick in the walls came with a story. When he walked us to school, my short legs trotted three steps for every stride he took. His warm hand encapsulated mine, as his presence did my heart. Often our breath hung before our faces as we made our way along Castle Street, him telling stories, me asking questions. Some mornings, the sky behind the old windmill on the far hill blushed as pink as our cheeks in the sunrise. On other mornings, that hill could be lost in the fog obscuring the view of our school. On those occasions, Dad would stop, give my hand a squeeze and say, “Oh no, the school’s gone! We’ll have to go back home.”

I’d giggle at his silliness, and play along. But we always kept walking towards the school for we both knew it was still there, even if we couldn’t see it.

Alleyways is a socially engaged public art project led by the artist Kevin Killen and one of three strands of a wider programme called Connected – a new creative initiative jointly funded by the Arts Council of Northern Ireland’s Local Government Challenge Fund and Armagh City, Banbridge and Craigavon Borough Council. The Connected programme is building collaborative creative partnerships between local audiences, artists and cultural venues in the borough.