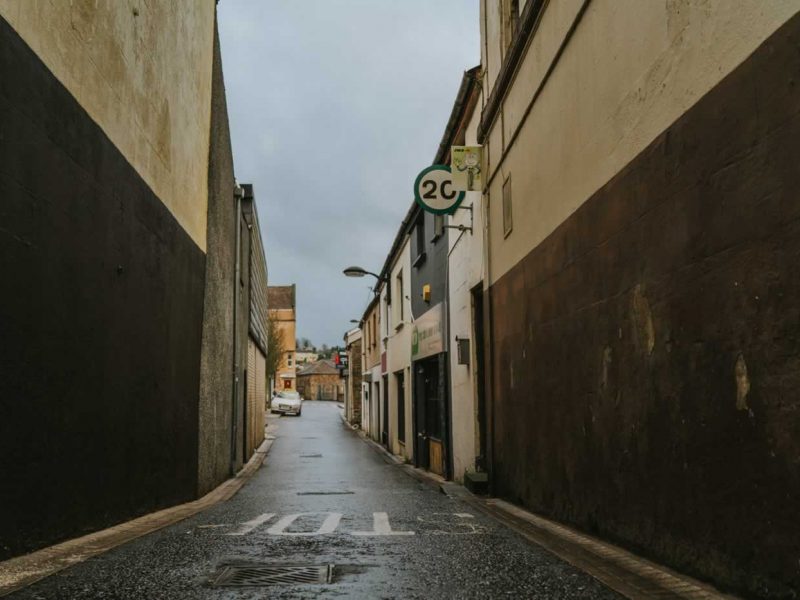 Like any urban area with a long history, Armagh’s network of streets has grown and developed over many centuries. The city is dominated by the hilltop on which, tradition states, Patrick erected his first stone church in the fifth century. From medieval times many of the main streets have followed the circular contour around this drumlin and time has consolidated the location and extent of these major thoroughfares. However the courts, alleys, backstreets and gateways running off them have changed in response to economic and social changes in Armagh over the past 400 years.

Some of the streets identified as part of the scheme, like McCrum’s Court, have seen the disappearance or transformation of its old warehouses and inferior housing and have been reenergised by commercial developments into a smart pedestrian shopping area. The development of Jenny’s Row took a different direction with the demolition of the old eighteenth century residences and their replacement with affordable social housing in the heart of the city centre.

Other areas such as Little Barrack Street have also seen the old houses disappear and there is scope for future development which embraces the rich history and heritage that could revitalise “The Back Looter” as it is known locally. There is a long list of minor streets with colourful names that have disappeared, some had such a short lifespan that their whereabouts are now unknown. Cloghers Lane, Grew’s entry, Salt Box Court, and Wilton’s Court where small nineteenth century communities that have vanished along with many of the names of those that once struggled to eke out a living there.

The past forty years have seen large areas of change and development on what was once urban gardens and wasteland behind the commercial premises in English, Scotch, Ogle and College streets. A lot of this has involved creating carparks and modern shops. Consequently, a modern version of the old alleyways has emerged. What were once private gateways that serviced stores and warehouses have now been opened up as convenient shortcuts from city centre shops to carparks. Convenient they might be, but most lack the natural charm that centuries of gradual change imbues or even an agreed name. They might be a recent addition to the city’s streetscape but in Ireland’s oldest urban centre, you don’t have to scratch the surface very deeply to dig up some history. Even these modern shoppers’ shortcuts have stories to tell about the people who lived and worked in them down the years.