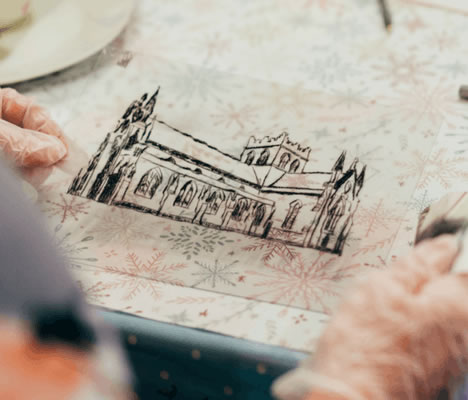 A Reflection on the Alleyways project by Byddi Lee

It’s great to see public art on the streets of Armagh. Better still to be a part of the creative process that gives rise to that piece of art and that’s why the Alleyways connected project has been so valuable to the community groups here.

I was delighted when Robert Peters connected with the Armagh Writers to see if we’d be interested in the project to help Kevin Killen’s research for his sculpture. I said yes, of course – art always tells a story. With this in mind, I facilitated a flash fiction workshop themed around Armagh’s Alleyways and the participants produced some great stories.

Inspired by the Stories of our Streets

Alleyway Connected reached into a wide variety of creative disciplines and interacted with many local groups. I signed up for one of Donna Fox’s tours of the city and met artists and writers who were inspired by the stories Donna told us of the streets we walked through every day. Some of the stories were familiar, such as the history of the Hole in the Wall Bar. The relatives of the prisoners had to pass their food through a hole in the wall and that’s where the name came from.

Other stories surprised me. Jenny’s Row was not called after a woman as I’d always thought. My romantic imagination had some notion that perhaps the narrow lane was named for someone’s sweetheart, but in fact, it’s named after a man, the Reverend Henry Jenny who was a rector from Mullabrack in the early seventeen hundreds. He had a residence on English Street that now houses the Bank of Ireland. As a writer, it interested me that he was often visited by Dean Swift, otherwise known as Jonathan Swift the author of Gulliver’s Travels.

Plugging Into Armagh’s Culture and Legacy

Armagh is a city with a long legacy of culture. I loved the idea that Kevin wanted to plug into this. While listening to Kevin talk about the project at the Armagh County Museum, I was moved to see my wee city through Kevin’s eyes. He observed how warm and friendly the people were and how you couldn’t walk down the street without people greeting you.

At an art workshop led by Robert Peters with the local group React, I listened with fresh ears because of what Kevin had observed. The people chatted and told stories while they painted. Kevin was right about their friendliness and sense of humour. I wondered how he would accomplish the task he had set himself to capture that.

I had the opportunity to join in one of Kevin’s workshops. We used words precut in metal to build a sculpture of our own. It brought together young and old and all sides of the community. We explored the meaning of the words and their impact on others. It made us think. I liked that.

Because of this project, I believe we will always feel connected, not just to Kevin’s final piece of art but to each other too.